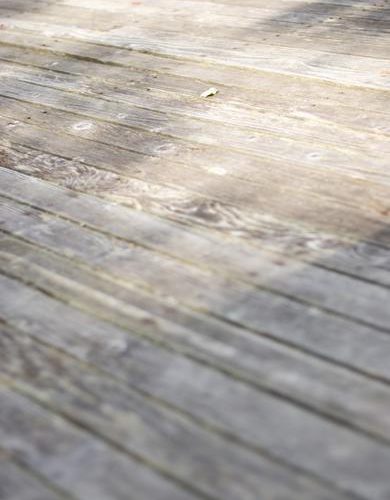 What causes wood decks to crack and turn gray?

All parts of a home exterior are under constant pressure from the environment, and decks are no exception. As a Washington D.C. area painting contractor, we at Manor Works spend much of our time protecting wooden decks from the natural forces that break them down.

While some decks are made from expensive or even exotic woods that have natural weather resistance, most decks here in northern Virginia and suburban Maryland are made of pressure treated pine. Although this wood is specially treated to preserve its appearance and integrity, it can begin to show the effects of age within six months.

Two common problems that we see on decking are cracking and cupping. Cracking is caused when moisture from rain and snow penetrates the wood, causing expansion, and then the wood dries with the warmer weather, causing contraction. This seasonal growth and shrinking cause long cracks to form along the length of the boards, ruining the appearance of the deck and causing a splinter hazard. As a professional house painter, Manor Works recommends using a stain or sealer to prevent water entry and lengthen the life of your Washington D.C. area deck.

Cupping is when a board curls or twists in the direction of the growth rings, creating an uneven surface and long, shallow puddles on the boards. This defect is also caused by water entry, but it can be easily prevented by proper deck construction. When deck boards are installed, they must be laid in such a way that the growth rings are inverted like an umbrella, rather than upended like a bowl; determine this by looking at one of the cut ends. Adding a sealing product will also help to prevent cupping.

Another sign of age in wood is graying, which is caused by ultraviolet (UV) radiation from the sun. While this does not affect the structural integrity of the deck, the appearance becomes very dull and unsightly, diminishing the value of this home-extension. This process can be seen on new decks in as little as one month. Sealants, while they will prevent water entry and the associated cracking, will not prevent graying since they do not block UV rays. Tinted sealers and deck stains, however, protect outdoor woodwork against both water entry and graying.